Brisco County, Jr. Brisco is the son of Marshal Brisco County, Sr. and Grace County. He went to seven years of college at Harvard where he earned a law degree. When asked why he doesn’t practice he replies, “Tried it, didn’t care for it.” After the murder of his father by John Bly and his Gang of 12, Brisco has sworn to continue his fathers work and track down Bly and his band. With his trusty horse, Comet, he travels the west always looking for “the coming thing”. His keen intellect serves him as well as his fathers carved ivory handled six shooter, which he is an expert with.

Synopsis
When U.S. Marshal Brisco County, Sr. is murdered by John Bly and his gang of outlaws, the robber barons of San Francisco’s Westerfield Club hire Brisco County, Jr. as a bounty hunter to round them up. Brisco meets a lot of interesting people along the way, including rival bounty hunter Lord Bowler, and the Westerfield Club’s stuffy lawyer, Socrates Poole. He also learns of a mysterious object which John Bly would do anything to possess, for the supernatural power it can give him. 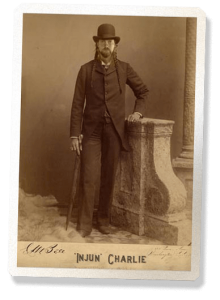